I’ve been investigating this for some time now. This is a time of turmoil. This is a time of unrest. On one hand you have a world that has already changed. We already interact with everything digitally, we already use our phones for everything, we hardly ever watch live TV unless it’s a special event. What’s interesting is that the shift happened so rapidly that we don’t even realize how fast the earth moved beneath our feet.

Marketing is all about eyeballs. What is capturing your target customer’s attention? For decades it was the newspaper, then the radio, then television, then the internet. You were present and you were captivated and could be sold to. Let’s now consider the greatest of all disruptions to this landscape–the smartphone..and more specifically the iPhone (see the chart below on the units sold). From 2009-2015 unit sales went up 10x.

That is astonishing. Now compare that with the fact that Deloitte research has found that the average smartphone user checks their phone 46 times a day. The point in stating this is that eyeballs shifted drastically, and not just some eyeballs….everyone’s eyeballs. The consumer was now in control and was connected to world of entertainment and information at their fingers. Social networks blossomed and entire industries were created. There’s no need to watch the weather channel and wait for my city to come up–there’s an app for that! There became an app for everything. The marketer lost complete control of a century’s worth of consistency in just 6 years. How can you even imagine preparing for that? The entire chessboard has been reset, and the marketer didn’t even know the game was chess still.

So if we look at the age of a Vice President of Marketing at the time in 2009 they were likely around 40 years old. As their careers expanded they may been promoted to Senior Vice President in 2012, but in 2015 when they thought they were on a track to become the CMO the entire ground had shifted beneath their feet. An iPhone and all the commerce connected to it was hardly in existence when they were the VP and now it dominates how their customers are consuming. At the same time this was occurring consumers changed their entire buying habit. So why would the CEO make someone their top marketer if they didn’t truly intimately know their customer? Some folks were able to get away with being “translators”.

Today’s boards of directors are now asking the senior management, “what are we doing about digital?” and some are even asking for the exact metrics. They previously may have needed a translator; meaning someone who could help draw a parallel between normalized more traditional marketing metrics to what that actually meant in digital speak. So in 2016 our past VP of marketing is now 46. He may have hired some great 25-35 year olds that were baptized in digital and has been able to get away with telling his boss that he has to be the go between. When all of a sudden digital has now become the standard and CEO himself is being immersed in it. Senior managers want to be closer to the actual detail because their jobs are on the line too. Guess what…the 46-year-old ‘translator’ is now out, and up comes the ‘kids’ that were baptized in the modern world.

So back to my first point:

A study carried out in Britain said that cognitive decline in the brain begins at 45. Now there’s plenty of incredibly smart 45-year-olds and it’s silly to say people over 45 are somehow getting less smart, but imagine having to re-imagine yourself and learn a new world at that age.

The amazing silver lining here is that if CMOs are able to adjust, move faster, become data driven and re-learn everything they were taught in their first 20 years of their career..they will survive and thrive. Combining new knowledge with wisdom of experience is an incredible asset. Get a team full of 60 year olds with wisdom and intelligence…you can go rule the world!The 45 year old RIGHT CMO is not endangered…she’s being looked for. 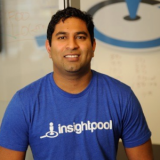